LONDON, March 23 (Xinhua) -- British Prime Minister Boris Johnson announced Monday evening a series of measures that aim to restrict social contact in the United Kingdom, so as to curb the spread of COVID-19.

Johnson made the announcement during a TV address to the nation. "From this evening I must give the British people a very simple instruction: you must stay at home," said the prime minister.

Starting from Monday night, people in Britain will only be allowed to leave their homes for "very limited purposes", including shopping for basic necessities, for any medical need, for one form of exercise a day, and to travel to and from work when necessary, said Johnson.

Police have powers to enforce the rules, including fines and dispersing gatherings, according to Johnson. 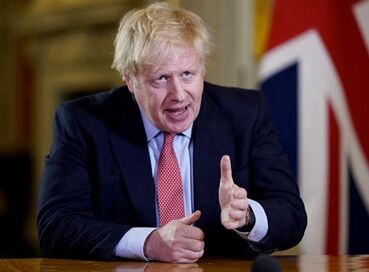 Meanwhile, all shops selling non-essential goods, such as clothing and electronic stores, are ordered to close, and places like libraries, playgrounds, and outdoor gyms will be closed.

All social events are banned and even gatherings of more than two people in public, except for people one lives with, are banned as well.

The tougher new measures will be in place for at least three weeks from Monday evening, according to the government.

The announcement came after the prime minister warned Sunday that the government will have to go further if people do not follow its advice.

"I believe the great majority of scientists will say the same, these measures are certainly appropriate and sensible and it was high time that they are taken by the government," said Prof. Sylvia Richardson, director of MRC Biostatistics Unit at University of Cambridge.

"Whether they are effective will depend on compliance and the prime minister's message needs to be reinforced by a daily communication exercise targeting the general public as well as special groups like young people," said Richardson.

The government has been stepping up its measures in recent weeks. It was only on March 20 when it announced that cafes, bars, pubs and restaurants, etc. must close.

But during the weekend, large groups of people were seen in some parks and tourist spots, prompting concerns that many people might be ignoring government's advice of avoiding social contact.

This happened despite the fact that COVID-19 cases have been rising quickly in the country.

As of Monday morning, there had been 6,650 confirmed cases of COVID-19 in the UK, an increase of 967 in the past 24 hours, according to the latest figures released by the Department of Health and Social Care. A total of 335 COVID-19 patients had died, the figures showed.

"Without a huge national effort to halt the growth of this virus, there will come a moment when no health service in the world could possibly cope; because there won't be enough ventilators, enough intensive care beds, enough doctors and nurses," said Johnson.

Aside from these measures, the government is also giving more funding support to research on vaccines and other treatments.

Six coronavirus research projects will be the first to benefit from a share of 20 million pounds (23 million U.S. dollars) in government investment, according to a statement from the government.

Two of these projects will carry out pre-clinical and clinical vaccine trials, as well as supporting researchers to develop manufacturing processes to produce a vaccine at a million-dose scale.

"In the midst of a global health emergency, the UK is using all its extensive research expertise to quickly develop new vaccines to target this international threat," said Secretary of State for Health and Social Care Matt Hancock.