FRANKFURT, July 16 (Xinhua) -- The European Central Bank (ECB) said on Thursday that it decided to keep monetary policy unchanged in its July meeting.

The 19-nation eurozone base interest rate will remain at 0.00 percent, with the marginal lending rate and deposit rate remaining at 0.25 percent and minus 0.50 percent, respectively, according to a statement issued after the meeting.

The ECB's Governing Council said it will continue its purchases under the pandemic emergency purchase program (PEPP) and its regular asset purchase program. It will also continue to provide ample liquidity through its refinancing operations. 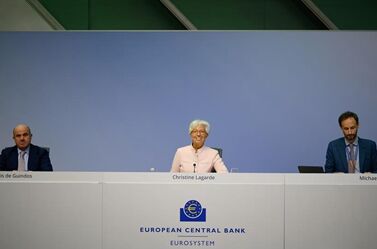 "The Governing Council continues to stand ready to adjust all of its instruments, as appropriate, to ensure that inflation moves towards its aim in a sustained manner, in line with its commitment to symmetry," the statement said.

The announcement came just before a key European Union (EU) summit slated for July 17 and 18, when EU leaders are expected to meet in person in Brussels and discuss the bloc's response to the coronavirus pandemic on the fiscal front.

Recent economic data and survey results suggested a significant yet "uneven and partial" recovery in May and June, but uncertainty remained concerning the evolution of the pandemic and the economic outlook, according to ECB President Christine Lagarde.

"Economic indicators remain well below the levels recorded before the pandemic, and the recovery is in its early stages and remains uneven across sectors and jurisdictions," Lagarde said during Thursday's press conference.

She noted that ample monetary stimulus is still necessary to support the economic recovery and to safeguard medium-term price stability, the reason why the ECB reconfirms its accommodative monetary policy stance.

The central bank has taken a series of policy measures since early March to mitigate the negative effects of the pandemic on the eurozone economy. In its last policy meeting in early June, the ECB expanded the PEPP by 600 billion euros (685 billion U.S. dollars) to a total of 1,350 billion euros, as well as extending the horizon of the purchases.

Lagarde said the pace slowed down a bit recently because the market became more stable and fragmentation risks were significantly reduced. However, she said the ECB baseline is to use the entire envelope of PEPP, unless there are significant upside surprises.

Responding to a question regarding the capital key, a benchmark that requires the ECB to buy bonds in proportion to the size of each eurozone economy, Lagarde said temporary deviation from the capital key is part of the flexibility principle applied to the program.

Lagarde said the ECB strongly welcomes the Next Generation EU proposal. "It is important for the European leaders to quickly agree on an ambitious package."

While admitting "in Brussels things take time," Lagarde said a very large number of leaders are perfectly aware of the importance of not wasting time and of being able to signal to the Europeans and the world that there is a level of consensus and determination to recover together and support each other.

Lagarde also noted that the Recovery and Resilience Facility, the bulk of Next Generation EU, will need to be firmly rooted in sound structural policies conceived and implemented at the national level.

Carsten Brzeski, chief economist at ING Germany, a bank, said the ECB sees as much uncertainty as all other forecasters, as suggested by subdued labor market conditions, precautionary household savings, dampened investment, weak global growth and the risk of a second wave of lockdown measures.

Brzeski believes the ECB will wait until the September meeting, if not the late October meeting, before deciding on any next steps.