ATHENS, Sept. 7 (Xinhua) -- Malta's Foreign Minister Evarist Bartolo on Monday called for dialogue and compromise to de-escalate tension in the Eastern Mediterranean lately, during a visit to Athens.

The other option of a military confrontation in the region would be more painful, he stressed at the joint press conference with his Greek counterpart Nikos Dendias after their meeting.

"The best way to build confidence with each other is to stop all activities in contested areas so that one can sit down and discuss... if we choose the other option, military confrontation, that would be more painful," Bartolo said in remarks broadcast on Greek national broadcaster ERT. 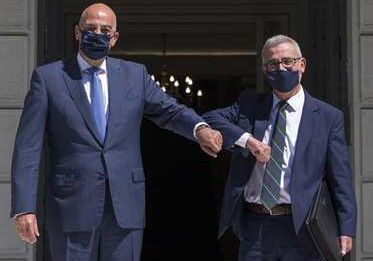 Growing tensions between Greece and Cyprus on one side and Turkey on the other in recent months regarding energy explorations in the Mediterranean and maritime borders have caused concern among European Union partners and other countries.

"(Greece is) always ready for dialogue with Turkey, but this dialogue should be conducted within the context of international law. There cannot be dialogue under blackmails and threats," Dendias said on his part.

Dendias said the discussion with Bartolo also included the issues of the migration-refugee flows and the situation in Libya and the operation to uphold the arms embargo, according to an e-mailed press release issued from his office.