In a lengthy speech at the White House East Room packed with Republican lawmakers, administration officials and reporters, Trump called the event "a celebration."

While holding up a copy of Thursday's The Washington Post with the headline "Trump acquitted," the president joked about going to take the paper home and frame it. 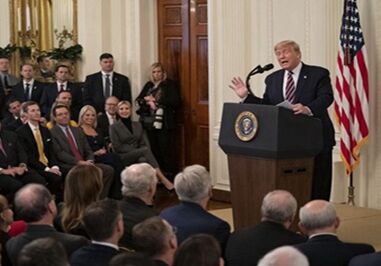 On Wednesday, the final day of the Senate trial of Trump's impeachment, senators voted 52 to 48 to reject the first charge of abuse of power, and 53 to 47 against the second charge of obstruction of Congress.

Senator Mitt Romney, a Republican from Utah and the 2012 GOP presidential nominee, broke from the party by voting "guilty" on the abuse of power charge against Trump, becoming the only member of the chamber who crossed party lines.

Taking a shot at Romney, Trump called him "a failed presidential candidate."

Romney, in a Senate floor speech on Wednesday explaining his decision, said "the president is guilty of an appalling abuse of public trust."

Pelosi, in her weekly press conference on Capitol Hill on Thursday, said that the House "had a strong enough case to impeach and remove."

"You're impeached forever, you're never getting rid of that scar," Pelosi said of Trump. "History will always record that you are impeached for undermining the security of our country, jeopardizing the integrity of our elections, and violating the Constitution of the United States."

The strained relationship between Trump and Pelosi is in limelight again after a pair of dramas on the occasion of the president's State of the Union address to a joint session of Congress on Tuesday.

Trump, before starting the address, appeared to snub Pelosi's offer of a handshake; when the president finished speaking, the House's top Democrat ripped up her copy of the speech.

The Pelosi-led House impeached Trump in December last year after an inquiry triggered by a whistleblower complaint that raised concerns about the White House's interactions with Ukraine.

Trump was alleged to have pressured his Ukrainian counterpart, Volodymyr Zelensky, into launching investigations that could politically benefit him by withholding military aid from Ukraine. Furthermore, the White House allegedly tried to cover it up.

The president has repeatedly denied any wrongdoing or a "quid pro quo" with Ukraine.

Bitter partisan wrestling continued in the Senate impeachment trial as Republicans and Democrats were sharply divided on whether to allow subpoenas for witnesses and documents till a failed motion last week kicked off an endgame.

Trump's acquittal was widely expected as Republicans, largely unified during the impeachment proceeding, control the Senate, making it almost impossible for the 67-vote conviction threshold to be reached.